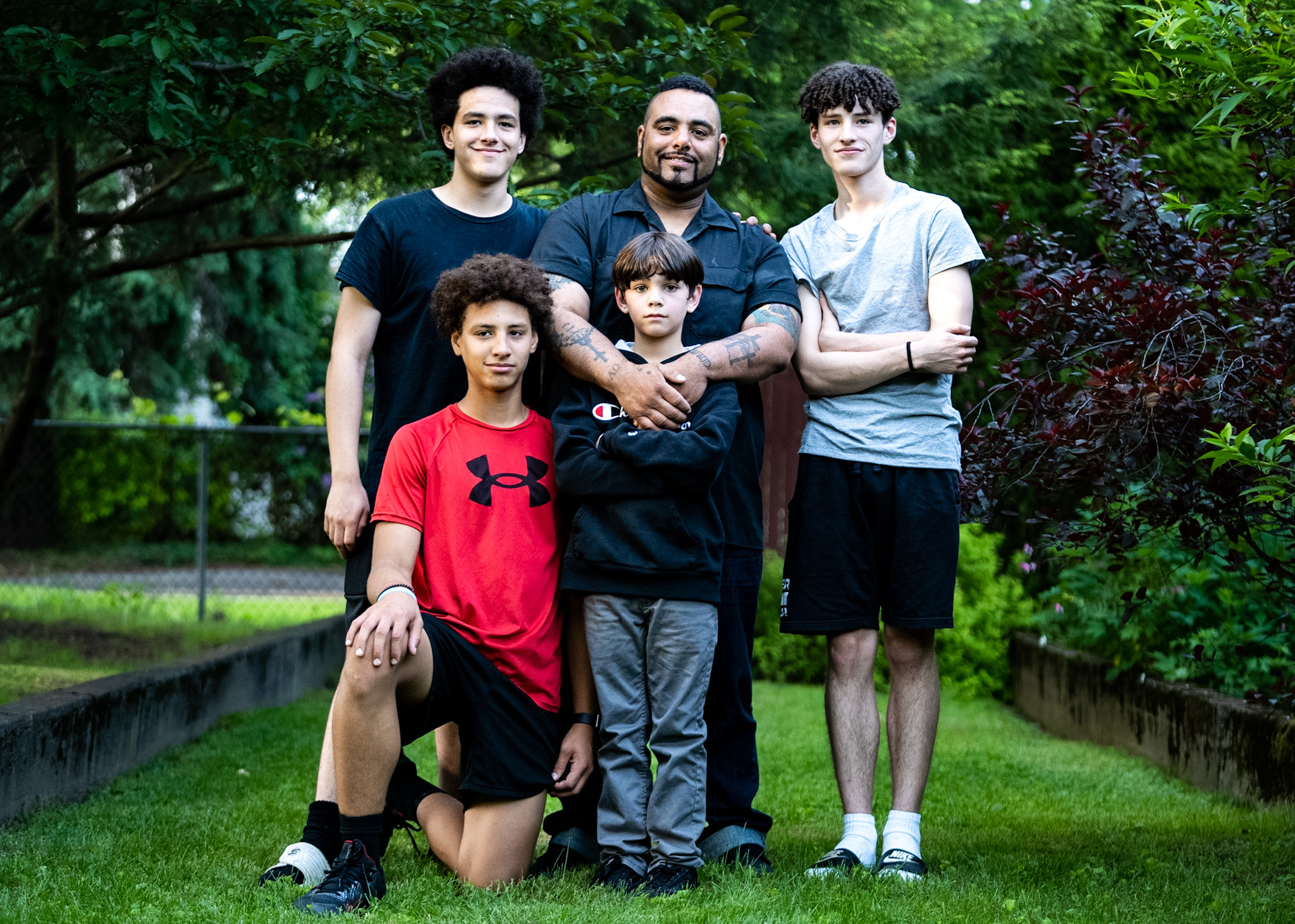 Edward Hunt’s addiction to alcohol began in his mid-20s, a few years after his marriage at the age of 22. As he looks at his life before and during his addiction compared to the life in recovery he has now, it’s like looking at the lives of completely different people.

“I had some underlying mental health issues that contributed to my alcoholism. I was able to deal with it early on, but looking back, there were signs of alcohol abuse. I didn’t drink daily, but when I did drink, I couldn’t stop,” he said.

Hunt’s drinking became more frequent, and more excessive each time he drank. It quickly took a toll on his family and his job.

“My wife and I got into a huge argument. She was holding my son Elijah and that was the first time she was afraid of me,” he said. “I never laid a hand on her, but she was afraid because I was so intoxicated. It progressively got worse. I started a job where we would go out drinking every Sunday after work, and that’s when it really started. I would put myself in precarious situations. Luckily, I had no legal consequences from it. I ended up being divorced. I lost a couple of jobs because of my addiction to alcohol.”

Hunt’s addiction continued for more than a decade. He gained an excessive amount of weight, tipping the scales at nearly 400 pounds. He drank throughout the day, eating one meal of whatever was available, which usually wasn’t healthy. He was diagnosed with high blood pressure, pre-diabetes and had severe edema in his legs.

Then the Covid-19 pandemic hit. Divorced and estranged from his children, Hunt continued drinking and became a recluse. “I worked for a temp agency but couldn’t keep a job. I got evicted from my apartment. My fiancé, her daughter and I were living in a hotel. I thought there was nothing wrong with it. I was working every day. She was working. I was drinking before work, after work. That was my life,” he said.

A series of phone calls with his sister, Shannon Osborne, a project manager at The Wright Center for Community Health in Scranton, ultimately changed the trajectory of Hunt’s life, and probably saved it as well.

“One day at work I was on break, sitting in my car and I called my sister. She told me that my ex-wife and my boys had a house fire the week before, and they were living in a hotel. I was oblivious to this. That’s when I realized that as their father, I should’ve been the first one to call, but I was not. I wasn’t even aware of the fire,” he said.

Instead of reaching out to his ex-wife and children, Hunt felt sorry for himself, blaming others, wondering why his children wouldn’t call him after a fire destroyed their home. Then realization struck. “Why would they call their alcoholic father? There was nothing I could do for them. I couldn’t help myself. If there’s one thing I’ve realized during my recovery, if I can’t help myself, I can’t help anyone else,” said Hunt.

After a few days, Hunt called his sister back. “I told her, ‘I need help. I can’t be like this anymore.’ I lost years with my children. I was embarrassed with myself; physically, emotionally. I did not want people to see me. I would physically get sick if I didn’t drink. I felt like a really bad father,” he said. “I think that was the main thing for me. I want my kids to be able to look to me for help. I was in their lives, and it was always sporadic. Many times, I made plans with them. I’d come home from work early and get drunk and couldn’t see them, so I’d send them money. And I thought I was being a good father.”

With Osborne’s help, Hunt voluntarily entered an inpatient rehabilitation program that lasted three months. At the conclusion of the program, he completed nearly five months of intensive outpatient rehab followed by another four months of outpatient rehab. Because he was paying child support, Hunt was placed in the Lackawanna County Diversion Court program, which provides support for people with addiction who continue to pay child support and are employed.

“We met every Tuesday with the judge to be held accountable. I was required to go to AA meetings and have a sponsor. It was very helpful,” he said. Hunt successfully completed the Diversion Court program and no longer must attend the weekly meetings with the judge.

What Hunt didn’t realize by doing all of this, he would have the opportunity to regain custody of nine-year old Silas, the youngest of his four children. “I was doing all of this for more than a year. When I got a hold of CYS (Children and Youth Services) and started the process for custody, I had all my ducks in a row and didn’t even realize it. I have a stable job. I have reliable transportation. I have a nice apartment. I didn’t realize how successful I was in my recovery, so me gaining custody of Silas was easy,” he said. “Two years ago, I wouldn’t have gotten custody of him. If I did, I wouldn’t be the father to him that I am today.”

Hunt’s days are now filled with spending time with his sons, exercise and work. He goes to the gym at 5 a.m. several times a week with his son, Isaiah, and plays basketball regularly with his son, Malachi. “My relationship with my boys has been a complete 180. They talk to me. Whenever I have a craving, or it comes into my head that I can have one drink, I think about going to the gym with my son and having alcohol on my breath and having to cover it up and lie about it,” he said. “I don’t have to lie anymore. It took time for them to trust me. I’m gaining their trust. I finally truly feel like a father now.”

Nearly 17 months after his last drink, Hunt is a different man emotionally and physically. He’s lost 120 pounds, no longer has high blood pressure and is no longer pre-diabetic, focusing on his life and self-care.

Hunt also has a job he’s proud of, working as a receiver/verifier in the warehouse of ID Logistics US in Taylor, formerly known as Kane Logistics.

“Edward is one of the better receivers. He is one of the guys we rely on. He’s one of the guys we go to for his reliability and to do the job properly without a lot of supervision,” said Mike McDonald, receiving and operations supervisor, who was Hunt’s boss for several months when he worked the overnight shift. “He’s detail oriented with a good head for numbers. There’s a lot to pay attention to. It could be tens of thousands of dollars’ worth of product on a pallet (that must be accounted for).”

ID Logistics US was not Hunt’s first job after rehabilitation. It took time and patience to find the right fit. “I put my recovery first. I put finances and everything else secondary to my recovery. It took me a couple of jobs to find the right fit,” he said. “I tell people, there will be failures, but they have to work through it. I worked at jobs I didn’t like; I just found another job while I was working.

“Putting recovery first and not putting too much pressure on yourself to find the perfect job, that perfect shift, that perfect amount of money. That will all come in time. Put the recovery first; I know it sounds basic, but when someone puts their recovery above all else, then everything else will fall into place,” Hunt added.

ID Logistics US doesn’t have a formal recovery in the workplace program, but it routinely hires people in recovery, offers them support and works with them to accommodate court appearances, meetings with probation officers, or drug testing.

“We do have employees who are alcoholics and have other issues in their lives and we do our best to be accommodating, especially with the night shift. Throughout the interview process, our managers are good at finding people to fit the culture we are trying to build; a culture that’s inclusive and friendly. We have no problem allowing them to take care of something that needs to be taken care of without drawing attention to it,” said McDonald.

Hunt agrees. “I don’t hide my addiction. I tell people I’m in recovery. I don’t go out of my way to talk about it, but I’m not embarrassed to bring it up. They are very supportive in your day-to-day issues. When you open up to Mike and he knows you’re being genuine and honest, it goes a long way with him. I do a good job because I respect (the supervisors) and I don’t want to let them down at all.”

McDonald’s advice to companies that are hesitant to hire people in recovery: don’t be. “I think the biggest thing I would stress is people are people, whether you’re in recovery or you’re not. You never really know what you’re getting with a new employee,” he said. “It’s good for companies that have those people. People in recovery are already strong enough and brave enough to face those issues in themselves. They know where they struggle, and they are working on it. I’d rather have someone working on themselves. It shows strength of character to go get that help.